Bridging the gap between business and consumers with Game Theory…

If the headline and subheading made you feel this article is for marketers and economists, let me assure you, this is a piece for us – consumers. I’d like to shed some light on how our relationship with businesses/brands has been in the past, how it will continue to evolve over time, and how it can be more humane and ultimately, less transactional.

So why ‘game theory’? What’s the angle?

I believe you’ll understand the connection once I refresh the term’s definition. According to Investopedia:

Game theory is the process of modeling the strategic interaction between two or more players in a situation containing set rules and outcomes.’

In simpler terms, whenever we have a situation with two or more players that involves quantifiable consequences, we can use game theory to help determine the most suitable/preferred outcome.

It’s not hard to grasp that in the game of business these major players are companies, their competitors and consumers. Here’s an example of how game theory can be applied in the same business situation by companies and consumers.

A and B are two competing companies that sel cars, and they are the only two dealers present in their market. Their discounts are the same, just on different days. On certain days of the week A offers better discounts, and on other days, B does. Depending on the day, buyers choose whether to buy from company A or company B – fairly simple!

Then suddenly company A changes their pricing strategy. They introduce better discounts than B throughout the week. E.g. if company B is selling a car at a minimum price of $50,000 on Wednesdays only, company A starts selling the same model at $49,000 every day! Naturally, all the customers come running to company A! But how did they make this work?

Company A looked at their sales data and realized that almost all the customers that bought cars from them also bought accessories: seat covers, stereos, etc. Only a few didn’t buy any accessories or tried to negotiate on their prices. That gave A the brilliant idea of lowering the price of their cars and increasing the price of the accessories in such a way that they wouldn’t just break even, but earn a profit too. Something like this:

Smart, isn’t it? Even after selling the car at a lower price, A managed to earn $200 more on almost every deal! The poor customers that were getting a better deal from B, now pay more and foolishly still think that they are getting the best ‘value for money’!

It’s important to note, this situation could change if a smart buyer wanted to look for better prices. With a little more research, they would buy the car from A at $49,000 and the accessories from B at $1,300 – a total price of $50,300.

This would be the sweetest deal! Without even knowing it, smart buyers are forever engaging in game theory all on their own!

Now that we’ve seen how game theory affects decision-making, let’s see how it can simulate two completely contradictory models – ‘Business vs. Consumer’ and ‘Business and Consumer’.

Business vs. Consumer – A zero-sum game

The above reference is a classic example of a ‘Business vs. Consumer’ case. In game theory it’s known as a non-cooperative or competitive game. As the name suggests, in this game, out of all the parties, only one can win and the rest lose. Here company A wins, while company B and the consumers lose.

If we drill down further, we’ll see it was quite a logical choice for A to offer discounts throughout the week, as that brings them the best results, irrespective of what B does. This is known as ‘Nash Equilibrium’ in a competitive game.

The above reference is quite common for big ticket items, like cars, furniture and consumer durables (TVs, refrigerators, etc.).. The general tendency of consumers is to look for better deals/bigger discounts for these items, whereas for smaller items, they don’t do so as much.

Clever companies make full use of this buying behavior. They bring their prices down for the big ticket items, so people buy their brand over their competitors’, and then push the prices up for the smaller items, like accessories that consumers don’t worry about as much.

So next time you attend a Mega Sale – online or in-store, you know what to do! Be vigilant!

This may seem trivial, like one of those games where the smarter contestant wins, but it reveals an attitude of businesses and brands that isn’t just unhealthy, but has severe implications for people, society and sometimes even the ecosystem!

The problem isn’t just that one wins by beating the others. It’s rather to what extent one actually goes to beat the rest!

Unfortunately, this has been the attitude of many businesses for decades, and the more their marketing/advertising grew, the stronger this desire to win became. For instance, check out these vintage cigarette ads. 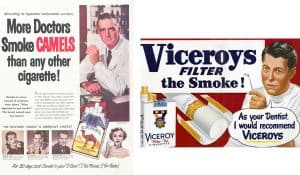 Smokers would smoke with or without ads, cigarette brands have known that all along. But what about those people that were on the fence, or were trying to quit an unhealthy habit, or kids who were at an impressionable age? Advertising like the above could have been severely misleading – especially seeing doctors recommend smoking those brands! The brands surely sold more cigarettes and earned better market share, but who paid the cost?!

In today’s data-driven economy, this ‘win-lose’ game has found a new definition. Forget about studying consumer data and understanding their buying behavior to sell smarter; now companies have started selling the data itself! Earning money both ways! E-commerce is an ideal example of that.

But there must be an alternative, beyond this constant competition, right? Well there is, and that’s the other and better way to apply game theory.

Business AND Consumer – The ‘win-win’ game

While the zero-sum game has been ruling the business segment for decades, and is still a favourite tactic for some industries, we’ve seen the emergence of another approach taken by some responsible companies lately.

Instead of indulging in a cut-throat competition with their corporate contemporaries or treating consumers as an opponent, these brands have started involving them as partners, choosing to play a game of another kind – a Cooperative or Coalition game.

Simply put, a cooperative game is one where all participants agree to work towards a common goal, and based on their contribution, receive rewards or benefits. Rather than stabbing each other in the back and exploiting their consumers, businesses work together to help each other and consumers better from that coalition. So, rather than a ‘win-win’, it’s actually a ‘win-win-win’ game! Awesome!

Why is that important?

Because, a ‘competitive game’ is not a sustainable business approach. No matter how big an organization is, in this ever-changing business climate, companies can’t survive in the long run by killing off one another.

The ones that understand the value of working together will stick around. Because if they don’t work together, new/emerging players will, and by holding hands they’ll beat the big players at their own game. (Something which has started happening already!)

Apart from sustenance, collaboration-over-competition yields many other benefits too. To name a few, these are:

Smart companies understand this. That’s why there has been a surge in collaboration over the past decade, and the numbers are growing day-by-day! A couple of good examples of this are:

In fact, you would find many of these companies have gotten into multiple collaborations with different companies to offer better quality products/services, better value for consumers and innovative solutions. That’s the future brands should strive to build together, and that’s the only way of survival, because:

‘No matter how brilliant your mind or strategy, if you’re playing a solo game, you’ll always lose out to a team.’ – Reid Hoffman

Shaan loves weaving brand stories that are simple yet momentous. Over the past 7 years, he has explored several facets of Marcom to learn this art better. In 2016, he was awarded the ‘Star Youth Achiever’ from the Global Youth Marketing Forum for showing outstanding leadership and creativity. He feels, almost every brand has the potential to serve a humane purpose. As the Chief Strategist, Shaan is trying to bring that purpose to life for Sylo.

This article was proofread by Writesaver.

The most common mistakes advanced students make when learning a language

3 Ways to Make your English more Understandable and Natural

WS Questions: Is this sentence correct, “I hope you contact me”?

CIOs and CDOs: What does the Future hold? – In the world of Logistics

The Real ‘Sharing Society’ In The Making…

Authenticity is the New Integrity